To Catch a Piñata

"To Catch a Piñata" is the twentieth-sixth episode of Viva Piñata's first season. It originally aired in the United States on February 24, 2006 and Canada on March 3, 2007. 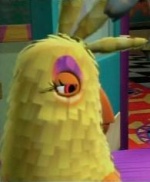 When Langston Lickatoad suddenly vacates Piñata Island, Fergy applies for Langston's Piñata Wrangler job. After all, if Fergy's the official wrangler, in charge of picking who goes to what party, he’ll never have to actually attend one himself. But when the mysterious Piñata Central boss notices that Fergy's best friend Paulie Pretztail has never been to a single party, he orders Fergy to round Paulie up for immediate party-duty!