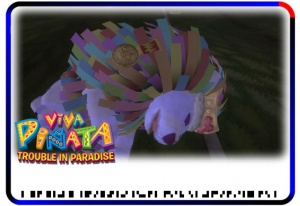 Pinatas can earn combat medals, by winning fights against other pinatas. As a pinata wins more fights, it earns a better medal.

You can make a pinata angry by poking it with your shovel or trick stick. It will then pick fights with other pinatas. Alternately, pinatas will fight on their own with conflicting species, such as Buzzlegums and Raisants. Note, however, that wildcard pinatas won't fight for any reason.

How to unlock the Come And Have A Go achievement 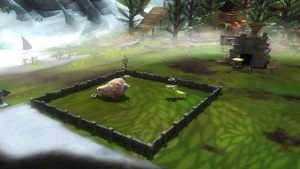 Fencing a Roario in with a Barkbark can help it earn a gold combat medal.

A simple strategy is to fence in a regular Roario and a regular Barkbark (wearing halo of hardness accessories so the losing pinata automatically gets healed after the fight). Since those two species are natural adversaries, they will fight on their own. Make sure that you don't try to direct the Roario to the Barkbark, as it's likely to eat the Barkbark instead of fighting with it.

After 17 victories, your Roario will have earned a gold medal, unlocking the achievement.

You may want to keep that Roario around, since one of Langston's destination challenges involves sending a blue Roario wearing a gold combat medal to Kenya. (Alternately, you can scan a Pinata Vision card to help with that challenge, however the combat medal achievement can't be unlocked that way.)

Gold Medal for the Roario?