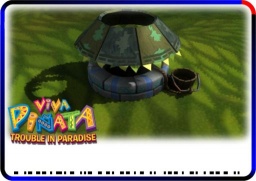 The Wishing Well can be purchased from Costolot's General Store in Trouble in Paradise, but only after you view the credits from the main menu of the game. The credits can be unlocked by either meeting all of the Unblock requirements for every blocked species, or by entering the Piñata People unlock code.

Ivor Bargain is trapped down in the well, and throws coins and items out if you toss down your chocolate coins to him. If you throw 1,000 coins into the well, there is a very good chance that Ivor will return several coins each worth 2,500. Miserly donations, on the other hand, may return rotten vegetables or weed seeds. The first time you throw 9,999 coins into the well, Ivor will return the amber gem, which is needed to create the Choclodocus egg.

Placing a lantern o' loot near the well multiplies the amount of coins returned to you.