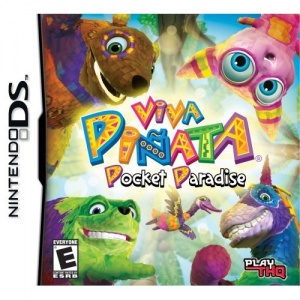 Viva Piñata: Pocket Paradise for the Nintendo DS was officially announced at the 2007 Comic-Con in San Diego on July 29, 2007. It will be released on September 2, 2008.

"A Kameo or a Viva Pinata on a Nintendo DS makes a lot of sense in a lot of ways from a franchise perspective," Shane Kim, Corporate Vice President for Microsoft Game Studios, told 1UP at the DICE Summit in Las Vegas during February 2007.

The game will feature all of the species from the Xbox 360 title but also 7 new ones, an expanded selection of tools, new game modes such as Sandbox and Episodes, and the ability to send pinatas via local WiFi.

Viva Piñata: Pocket Paradise is going to be published by THQ.