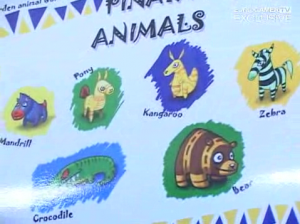 Cryptids are pinata species suggested from evidence insufficient to prove their existence with certainty.

These species are included in Category:Cryptid. It is unknown whether these species may exist in a future game or downloadable content. Should the existence of a species be confirmed in-game, it should be re-categorized appropriately.

Cryptid pinata species include kangaroos (pictured), breegulls (Kazooie of the Rare game Banjo-Kazooie is a breegull), goldfish (evidence found in Paper Pets) and starfish, which were seen in the episode Fudge Match. Platypus and Shark cryptid pictures can be seen in concept art in Trouble in Paradise. One of the concept art photos shows that a Platypus was envisioned to be breed from a Quackberry and a Sweetooth. Two other concept art photos showed a Shark and a Sour Shark.

Some Cryptids do not have articles because there is not enough information on them yet. They include: