"Chewnicorn in the Garden" is the fourth episode of Viva Piñata's first season. It aired in North America on August 26, 2006. 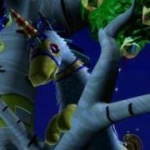 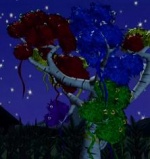 Fergy, Paulie, and Franklin are relaxing on the beach. A disagreement starts over the existence of the rare and exotic Chewnicorn. Paulie will only believe in chewnicorns if he sees one, so Franklin and Fergy are determined to prove they exist. The group buys a gem tree, to grow irresistible gems for a chewnicorn to snack on during the middle of the night. Fergy elects to take watch for the night.

In the morning, all the gems have been eaten off of the tree, yet Fergy had fallen asleep and failed to spot the chewnicorn. They decide to plant another gem tree, and this time, all three will take watch for the night. The pinatas fall asleep, one by one. Then Franklin wakes up to the sound of rustling in the gem tree. He carefully climbs the tree, to find Fergy chowing down on the gems! Fergy pleads with Franklin to lie to Paulie about seeing a chewnicorn. They manage to convince Paulie that a chewnicorn ate them, so one final watch is set. Again, Fergy can't resist but to indulge in the gems. However the clever pretztail has laid a trap for whoever eats the gems, and Fergie is snared. Discouraged, the pinatas begin to think that chewnicorns really might not exist, then start arguing about dragonaches. But maybe chewnicorns do exist after all...