The Piñatas Must Be Crazy

"The Piñatas Must Be Crazy" is the tenth episode of Viva Piñata's first season. It aired in North America on September 23, 2006. 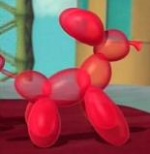 Franklin and Fergy are listening to one of The Bonboon's lessons and they dragged Paulie along with them. Paulie doesn't particularly like The Bonboon's brand of wisdom though. Mid-session they are interrupted by the piñata alarm! It seems that Ella has brought a party favor from her last celebration. She brought a small red balloon-animal home. The piñatas are unaware of what this strange thing is. The Bonboon then sees an opportunity... He tricks all of the pinatas into thinking that that little balloon is the mighty "Pinator" a god among piñatas!

Once The Bonboon has most of the pinatas duped into thinking of Pinator as a god, he claims that Pinator demands tribute. In candy! But Paulie isn't too convinced. After all the pinatas are exhausted, The Bonboon is eating the pile of candy and knocks down Pinator, Paulie gets a hold of Pinator and finds that he is a fake. He shows the other pinatas who are confused. The Bonboon then notices and in anger tries to show Pinator's "power" by inflating him to a massive size. Paulie seems to be cornered, but has a trick up his sleeve, a needle. After popping Pinator The Bonboon's stash of candy is blown all over the island!