"Mr. Unbustable" is the twenty-sixth episode of Viva Piñata's second season. It originally aired in North America on December 8, 2007. 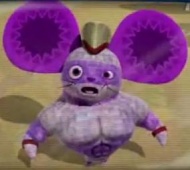 Fergy becomes a body builder to get out of parties. However, his plan backfires when Langston makes him a star attraction.

Characters who make their first appearences in this episode are: