Horstachio of a Different Color

"Horstachio of a Different Color" is the sixth episode of Viva Piñata's first season. It aired in North America on September 9, 2006. 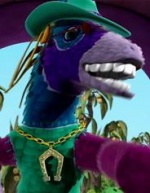 Hudson, Fergy, Franklin, and Paulie are hanging out at Hudson's house, talking about the upcoming spring fair Horstachio competition. Simone bursts through the door and alerts Hudson that he is losing all his bookings to a new Horstachio named Hamilton. Hudson's friends reassure him that he will win though. After a brief encouter with Mabel, Fergy, Franklin, and Paulie head over to the Doflap Inn and find out from Pecky that Hamilton is the real deal. Suddenly Hamilton enters the building, surrounded by the Pudgeon press corps. The cocky pinata then slips into the bathroom, where he secretly cancels some of Hudson's parties, however Fergy, Paulie, and Franklin overhear him! They devise a plan of their own to sabotage Hamiliton for the spring fair. Meanwhile Simone tries in vain to get Hudson into shape for the fair.

Hudson finally begins to train after seeing the gang hanging out with Hamilton. Meanwhile, the pinatas have been sabotaging Hamilton's chances by keeping him from eating and sleeping. When he is finally left in Mabel's garden to rest, he wakes up famished and devours her blackberries and daisies. In the morning, the Spring fair has started. Hudson shows up at the last minute and appears to be the victor, until Hamilton appears, transformed into a Zumbug. Hamilton is pronounced the winner and things seem over for Hudson. Mabel dashes up, blurting out that Hamilton ate the daisies and blackberries in her garden, changing him into a Zumbug. Since it is a Horstachio contest, Hamilton is disqualified and Hudson is the clear winner!