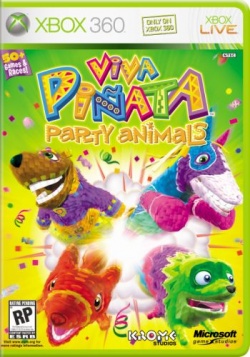 An exciting new party game in development by Krome Studios Pty. Ltd. based on the critically acclaimed Xbox 360 exclusive and hit animated TV series, Viva Piñata: Party Animals brings back the familiar piñata animals and invites players to compete in a host of mini-games against friends at home or over Xbox LIVE. Available this holiday season, only on Xbox 360.

The Viva Piñata™ gang is returning to the Xbox 360™ this autumn, and they’re ready to party! Viva Piñata: Party Animals™, designed by Krome Studios, is an action-packed, laugh-out-loud party game that’s as chock full of fun as Piñatas are full of candy!

Based on the popular Viva Piñata TV show from 4Kids Entertainment, Viva Piñata: Party Animals allows you to take control of series stars like Hudson, Fergie, Paulie, and Franklin as they compete on Piñata Island’s favorite reality TV game show, hosted by Pierre. These crazy contestants crave the spotlight and will be pulling out all the stops for this televised test of Piñata power!

Featuring over 40 unique, action-packed minigames and multiple heart-stopping trails, Party Animals’ simple yet addictive gameplay is great for gamers and non-gamers alike, allowing the whole family to join the party. From bug stomping to break dancing to candy grabbing, each minigame is jammed full of all the action and humor that Viva Piñata fans know and love.

In addition to the madcap minigame madness, Party Animals also includes several tracks of paw-burning party-game action. Each richly detailed course lets you run, dash, dart, and slide through many of Piñata Island’s most exotic locations while using a full arsenal of wacky tricks to stop your opponents in their tracks.

Crowds of the TV show’s most beloved characters gather in the background to cheer their favorite competitor on to victory. The winner of each race is awarded a special bonus multiplier that will help during the minigames that follow.

A unique customization system grants you the ability to fine-tune your gameplay experience to your exact specifications. You can control how you play the game by setting the game difficulty and adjusting the number of challenges, making the experience accessible to players of all ages and skill levels. As you win mini-games your overall Candiosity (AKA score) will increase. At the end of the tournament, the player with the most Candiosity wins and has their pinata shot to a party!

Up to four players can play simultaneously over Xbox LIVE®. You and your friends can jump in and out of the action whenever you choose, with AI-controlled opponents filling any empty slots, so the party never stops!