"The Abominable Jeli" is the fifth episode of Viva Piñata's second season. It originally aired in the United States on September 22, 2007 and in Canada on May 20, 2007. 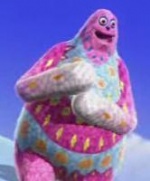 After a strange snowball on the beach, our heroes reach the Giant Snowball Fight between the Pengums and the abominable Jeli! Who will win?