Mousemallows have appeared in the following TV show episodes: 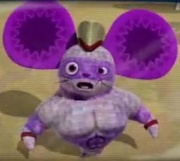