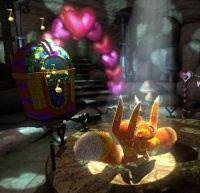 For answers to commonly asked Romance questions, see below.

Romance is essentially Viva Pinata's term for reproduction. Romancing allows you to grow your piñata population and help attract other piñatas to your garden. You'll know a piñata is feeling amorous when you see a heart appear above its head. Piñatas will not spontaneously romance; you'll have to play the role of matchmaker.

First, the romance requirements need to be met for the piñatas you'd like to romance before they'll get romantic. Next, you'll need to direct one romantic piñata to another romantic piñata (of the same species) to initiate the romantic encounter. When the smitten piñatas meet up, you'll be challenged by a short minigame. If you're successful, the lovers will head to their home for a romantic dance. Shortly thereafter, Storkos will appear and deliver an egg that will eventually hatch into your new piñata.

Each piñata has a set of requirements that must all be fulfilled before the piñata can get romantic. The romance requirements can be viewed by selecting a piñata and pressing

You'll need to match up the romantic piñatas yourself. They will not romance on their own, even if two or more piñatas of the same species are ready for romance. In order to pair the lovebirds up, select the first romantic piñata using

again on the second romantic piñata. If all goes well, the two piñatas will embrace and the romancing minigame will begin.

The romancing minigame basically invloves guiding one piñata through a maze, without touching any walls, to meet its partner before the timer runs down. Each species has a unique maze associated with it. The difficulty of the maze is related to the level and rarity of the piñata being romanced.

The walls in the maze are actually little creatures called loathers. The loathers are created by Professor Pester and they hate the piñatas being happy, so the whole idea is to avoid them at all costs.

You start with a limited amount of time and lives to reach your partner. The maximum number of lives you can have is five and is determined by the number of piñatas of that species in your garden. The more piñatas of that species you have, the lower the number of starting lives. If you touch a loather you will lose a life and waste some of your time. There are different coins to collect in the maze, worth a total of 20 chocolate coins per maze. It is recommended that you ignore the coins and focus on getting your piñata to its partner since there are much better ways of easily making money.

Loathers will behave in different ways, depending on their type and the maze.

After completing the minigame successfully, the happy piñatas will eagerly travel to their house so that they can start their romance dance. If you lose all your lives before reaching your partner, the minigame will end and the heartbroken piñatas will not romance. Don't worry, you can try to romance the heartbroken piñatas once again after you give them a moment to recover.

Piñatas love to dance! Every piñata home has a jukebox where they play their favorite songs and dance 'til they drop. After successfully completing the romancing minigame, your piñatas will travel to their home to get real friendly behind closed doors. The piñatas will perform a species-specific romancing dance, consisting of everything from tacky romance music to weird piñata dance moves!

After your piñatas have romanced in their home, an egg will be delivered by a character named Storkos. When the egg hatches, a new baby piñata of that species will emerge. After stretching its legs for a few moments, the new piñata will form a cocoon and a full-grown piñata will soon emerge. Congratulations!

If your piñatas have all of their romance requirements met, but hearts don't appear above their heads, you have hit the piñata population limit in your garden. Make room by selling or trading piñatas from your garden that you no longer need. Wild piñatas also count against this limit.

If you're in a hurry to get your master romancer award for a specific species, directing a Cluckles to an egg will cause it to hatch immediately. This can save you a lot of time and cause a population explosion.

If At First You Don't Succeed..

Sometimes a piñata may be too distracted or unhappy to go close enough for the romance to begin straight away. This may be a simple matter of clicking on the piñata and directing it a couple of times, or, you can buy a happy sweet from Costolot's.

Commonly asked questions
Are there any helpful romance mini-game videos?

I'm getting a "Romancing problem" message. What can I do?

This message will show up if one or both pinatas can't manage to get into their house to romance, because another pinata (or garden item) is blocking their way, or they've tried to enter at the same time and managed to block each other. Since they can't be selected, it's not possible to directly help them. If they've been stuck for a long time and the problem hasn't cleared itself, you can whack them, water them, or move their house by crating it up and shipping it to yourself. View thread

How do you get Master Romancers? I have romanced the Whirlm like 15 times.

As the FAQ mentions, you need to have seven members of a particular species in your garden at the same time. Don't sell any until you've reached seven total, and you'll receive the award.

How you get to seven is up to you. Romancing, trading, fetching, evolving, or any combination. View thread