For answers to commonly asked Piñata Vision questions, see below. 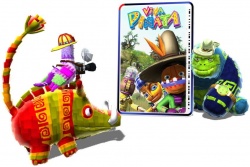 An example of a vision card

A never-before-seen feature called Piñata Vision allows players to plug in an Xbox Live Vision camera to create custom piñata cards that they can collect and trade with friends. With Piñata Vision, gamers can simply flash a piñata card up to the Vision camera, and the piñata, plant, tree, object or accessory will drop directly into the game. Special Piñata Vision cards allow the player to change various things about the garden, such as the weather, trick stick appearance, and ambiance music.

Pinata Vision unlocks at level 4 or when you've completed/skipped the first three challenges. You can use the camera whenever the green light on the camera is on. The camera is turned off when you are busy doing something else in the garden and use of the camera would be inappropriate. When the cursor is just idling in the garden, the light should be green.

Players can also create their own Pinata Vision card by using the in-game camera tool.

Tips for scanning a card

Be sure there is plenty of light when using cards. When the camera sees a card, a little screen will appear in the game just below the clock. Hold the card horizontally (landscape orientation) with the barcode at the bottom. Don't obscure the edge of the card with your finger tips; Don't hold the card between your index finger and thumb; don't bend it. With an open hand, grip the edges of the card between your thumb and fingers. You only need a gentle finger tip touch to keep the card steady. If the card flexes, you're gripping too hard.

Move the card forward and backwards until it occupies most of the camera view, but ensure all four edges of the card are visible. When the edge of a card is found, a blue line is drawn over the top of the little camera screen. Ensure the card is near/far enough for all four lines to be visible. If four lines are visible, adjust the cards position in front of the camera. The game will look for the top edge first, bottom, right and finally left.

When the camera has a clear picture, the card will light up in the screen, and you will hear a confirmation sound. New items will be placed on your cursor in the game, and other cards will trigger their effects almost immediately.

Once the focus is set and you get the knack of holding the card in the correct place, you will be able to scan cards quite efficiently. Remember, many cards can only be scanned once per pinata day.

If four lines are visible but the game will not read the card, this indicates that the focus of the camera is incorrect. Make sure the Xbox Live Vision camera focus is turned completely counter-clockwise. Then turn it back a bit at a time until the card is read successfully.

When you show the Xbox Live Vision camera a card, the display may change color to show you that something is not right. If it is amber, this means that the card has been read, but you can't use this card in this particular situation. Try again another time or in another place. This could be for a number of reasons:

If the display is red, it means the camera read the card, but it appears to be invalid. Red means:

Commonly asked questions
Can you use the Kinect sensor to scan Pinata Vision cards?

No. Trouble in Paradise is not compatible with Kinect; the game can't use the sensor to scan Piñata Vision cards. View thread