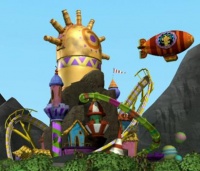 For answers to commonly asked Piñata Central questions, see below.

Piñata Central is the most important place on all of Piñata Island. It's the place that receives the requests for piñatas to attend parties all over the world. It's the place that double checks each and every piñata to make sure they are party-ready (checking candiosity levels, honing smiles, fluffing paper tags, etc.). It's the place that transports piñatas to parties quickly and accurately via their patented Cannonata delivery system. And it's the place the party-battered piñatas return to for all repairs they need after their treatment at the hands of those stick-wielding children.

Piñatas start out living the sweet life on Piñata Island filling up with candy and other treats. Once they reach maximum candiosity, piñatas are called to Piñata Central and dispatched from the Piñata Factory via the cannonata to delight fun-lovers everywhere.

In the Television Series

Hudson on the Candiosity meter

How does a piñata know when it's full enough to go to a party? Why, the Candiosity Meter of course! The official Piñata Island Candiosity Meter stands at the base of Piñata Central. Piñatas hoped to be sent to a party step onto the devices base, much like how you would get up on a scale. A battery of tests are run in a matter of seconds, including piñata-weight, x-rays and complex candy-stacking equations, and the results appear on the readout screens above: a happy face with a green check mark means that a piñata has achieved Maximum Candiosity and will immediately be going to a party. A frowning face accompanied by a big red X means the piñata is Rejected.

Certain piñatas, like Hudson Horstachio (piñata superstar) have their own home versions of the Candosity Meter. Langston Lickatoad, the official Piñata Wrangler and employee of Piñata Central, has a handheld version that he takes with him as he checks on piñatas throughout the garden. See also: Candiosity (episode).

A Cannoñata is a giant piñata cannon.

The piñatas travel to their various party destinations by way of the Cannonata. The Cannonata is a sophisticated array of high-powered cannons mounted atop Piñata Central. Inside the Party Control Room, piñatas are loaded into the various Cannonata Bays, coordinates are punched in, the big Red Button is pressed, and faster than you can say "It's party time!", Boom! The piñata is blasted off to the appropriate party! Ain't technology wonderful?

Once you become a level 14 gardener, Langston will start issuing factory requests to you for specific species to be sent to parties. If you accept the request, you'll receive a special crate and a generous time-limit to fulfill the request. If you don't have the required species, you can try attracting one to your garden (or hire Gretchen Fetchem to hunt one from the wild, if you've previously had one become a resident).

When your pinatas have been chosen by Pinata Central to join the elite ranks of piñatas everywhere and reached maximum candiosity they are sent off to parties around the world. A piñata's dream is to host a party and they'll be far more happy and valuable when they return. Your pinata(s) will be returned promptly, repaired and refilled with candy, along with a sprinkling of happy candy for other pinatas to enjoy!

Commonly asked questions
My pinata came back from a party... invisible. What do I do?

This glitch ocasionally happens, after sending a pinata to a party. (It might be due to your garden reaching its pinata limit, while your pinata is away at a party. If hearts tend to disappear for you, try selling some pinatas first before filling a factory request.)

Unfortunately, there's usually nothing you can do. A "fix" is to try and crate the pinata and ship it to yourself, which would make it visible again, but most invisible pinatas can't be selected (or broken open). View thread

I don't get any factory requests from Pinata Central anymore.

This is probably related to the above 'invisibility' issue. The game hasn't yet showered your garden with candy rewards from the "previous" factory request, because it's lost track of the invisible pinata returning. If you can find it, and break it open, the current factory request will complete, and new factory requests will occur. View thread